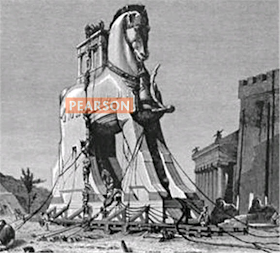 The Los Angeles Unified School District (LAUSD) will spend $30 million over the next two years on iPads for 30,000 students.

The measure passed unanimously in spite of opponents arguing that the money would be better spent on staff or to pilot both Windows and Apple systems and saying facility bond money should not be used for relatively short-lived teaching tools.

But, IMHO, they missed the key point -- the machines are Trojan Horses for textbook giant Pearson.

The LAUSD received 13 proposals and the top three called for different hardware -- Apple, Dell and HP -- but all three included an app to deliver the Pearson Common Core System of Courses along with other third-party educational apps.

I've seen nothing about the financial arrangement between Pearson and LAUSD.  I wonder what part, if any, of the $678 the schools are paying for the tablets will go to Pearson and what revenue, if any, Pearson will receive from adoption of their curriculum.

I do not mean to criticize Pearson's offerings -- I've not even seen them. (One must have a Pearson School account to see samples). This bundling of Pearson's material will give them a significant advantage, nipping competition in the bud.

Consider, for example, the Common Core math curriculum of the Khan Academy. Will a teacher or school be as likely to select that as the Pearson curriculum? I suspect not, and once they commit to one instruction/assessment platform, they will be locked in.

This situation reminds me of the introduction of the IBM PC in 1981. IBM's entering the PC market was a watershed event, legitimatizing the personal computer as a business and professional tool. IBM offered three operating systems, Microsoft PC-DOS, Digital Research CP/M and the UCSD P-System. Prior to the introduction of the PC, CP/M was the dominant operating system for business and professional applications, but it died almost over night because, although you could get it on an IBM PC, it cost more. Digital Research faded away and Microsoft became ... Microsoft.

After twenty years of serving up "pdf textbooks," we are starting to see innovation in Internet-based teaching material and systems -- will the new market be dominated by the same big-three textbook companies?

The LA Times reports that the iPads were locked down so students could only do school work on them. As one student said when she realized they were for school work only "You can't do nothing with them ... You just carry them around."

Well, students quickly figured out a simple hack to get around the limitation, so they could do the things teenagers do with iPads. School district officials reacted immediately -- they halted home use of the Apple tablets until further notice.

I understand that they do not want the kids tweeting or whatever during class, but they are throwing out the baby with the bathwater. Expecting students to stay within the confines of some educational program developed by Pearson or anyone else will not work. It flies in the face of student culture and expectations and ignores all of the truly educational uses for an iPad or other tablet that are available to faculty and students.

The Los Angeles Unified School District (LAUSD) has suspended its contract for iPads and Pearson Publishing software. The rollout program has had logistical problems, but, more important, critics (including me) have pointed out that it was a bad idea to invest so heavily in hardware that would become obsolete relatively soon and act as a "trojan horse," establishing Pearson as the publisher of LAUSD courseware. However, this move seems to have been precipitated by possible irregularities in the awarding of the contract. 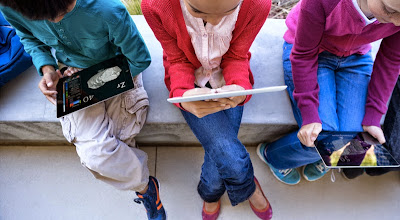 I told you so ... From coverage by Los Angeles raido station KPCC:

Los Angeles Unified told Apple Inc. this week that it will not spend another dollar on the Pearson software installed on its iPads and is seeking a multimillion-dollar refund from the technology giant.

Locking the school district into current hardware and a single courseware vendor made no sense in an era of rapidly changing technology and, even more important, pedagogical innovation.


Be sure to follow this link to KPCC's coverage.